Roger was a late twenty-something audio technician and a member of Helena's correspondent team.

Roger was a late twenty-something audio technician and a member of Helena’s correspondent team. He was the first of the team to be captured by the spider monstrosities beneath Manganese, all caught graphically on tape. He walked into the open doorway of one of the decaying buildings, and mid-sentence was pulled down into a hole in the middle of the floor – shattering his cheekbone as he hit the floorboards face-first on his way to being dragged underground. The cell found several broken teeth around the bloodspatter mark of the impact, and later ran into Dues – or, at least what was left of him. He was wandering the caves, moaning, and reached out to grab hold of Aaron Brandt – then opening his mouth and pouring spiders out of his rapidly deflating body. The team torched his remains, along with the majority of the spiders that had flooded out. The spiders did two Lethal damage to Aaron, and left him with many tiny scars dotting his neck and right cheek. 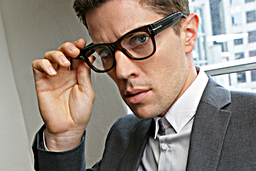